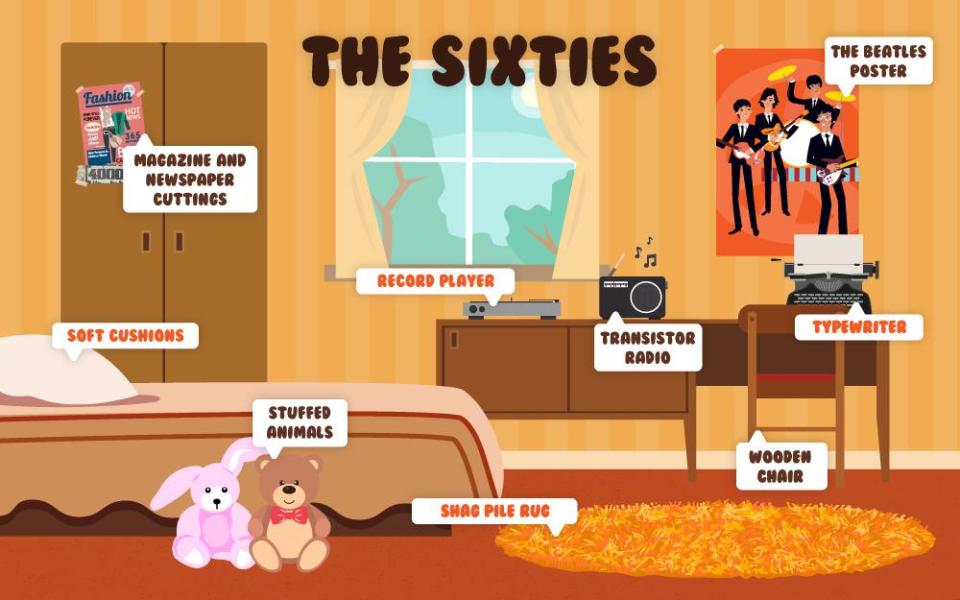 Commercial transistor radios are starting to look boring now. There are exceptions of course, such as the Sony TR-620, and the Toshiba 8TP-90. Sony unveils an all-transistor TV. They promote it with funny ads. It’s a great set, but costs a fortune. 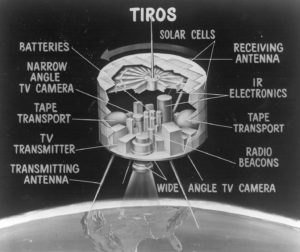 The first weather satellite called Tiros 1 is launched. Digital Equipment Corporation (DEC) sells the first minicomputer, the PDP-1, for $120,000. It is the first commercial computer equipped with a keyboard and monitor. No mouse though.

The first Playboy Club opens in Chicago. “Bunny” gets a new meaning. Roy Orbison releases Only the Lonely while Alley-Oop by Dyna-Sores peaks at #59. Other hits include Running Bear by Johnny Preston, The Twist by Chubby Checker, and You Talk Too Much by Joe Jones. Beach party movies give us a glimpse of those California girls the Beach Boys have been raving about. Whoa!

My first girlfriend throws a party at her house. We slow dance to Johnny Mathis. She has a Green GE P805. It’s the one with the swirls on the grill. I lust after it. She lusts after an older guy. Susie tells me it’s over while we sit at Bob’s Big Boy. I memorize the lyrics to Everybody’s Somebody’s Fool. 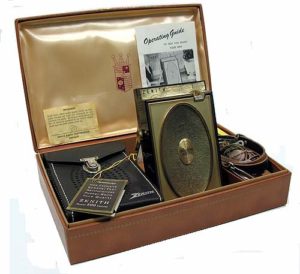 Zenith tries to hold the high ground by introducing a completely re-engineered Royal 500 dubbed the 500H. From it’s unusual oval speaker to the four innovative IF circuits, to the precise tuning dial, this is an AM portable that many feel has never been surpassed.

In May Vice President Johnson returns from a visit to Southeast Asia and tells President Kennedy that the US should either help the countries of Southeast Asia or get out. Our first helicopters arrive there in December. Still, the war seems so far away.

Bobby Lewis is Tossin’ And Turnin,’ Roy Orbison is Cryin’, and Del Shannon’s chasing his little Runaway. Bob Dylan and Joan Baez are getting ready to provoke us, but we don’t know it yet. People are taking sides. War still seems very far away.

There are 101 Dalmatians in our theatres, while Gidget Goes Hawaiian, and Andy Griffith and Mary Tyler Moore live in unfamiliar worlds that baffle, but intrigue us.

The Thunderbird had gained a little too much weight, but it looks like it might be fun to hit Route 66 in a ‘Vette. 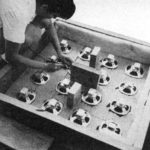 Kevin, Gene and I build a huge speaker called the “Sweet Sixteen,” using sixteen smaller speakers, and a bunch of plywood. The plans are from where else? Popular Electronics. We haul it to high school record hops, along with an old 12-watt Lafayette tube amp and take turns Dee-Jaying. Girls seem to like this. Susie even seems a little jealous. 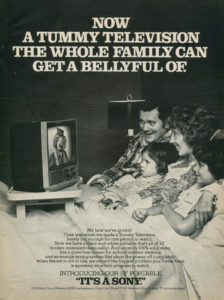 Sony is perfecting transistorized televisions. They announce the “Tummy TV.” It’s a hit. The ads are hilarious.

Light-emitting diodes (LEDs) are invented. The first radio paging system is demonstrated at the Seattle World’s Fair. Cellular technology is described to the United States Federal Communications Commission, (the FCC), but It will be awhile before we get disconnected by it.

TELSTAR, a commercial venture by AT&T, reaches orbit and demonstrates real-time communication via satellite, including the first transatlantic television broadcast. Teletype introduces the famous Model 33 series keyboard and tape punch terminal. It sounds like a freight train. No mouse is attached. Not even as an option.

John Glenn orbits the earth. Oh, and there’s this little outbreak called the Cuban Missile Crisis. Everybody on the planet almost dies, but the Cleavers on TV don’t seem to notice. Honestly, I don’t remember thinking a lot about it either. ‘Too much homework. 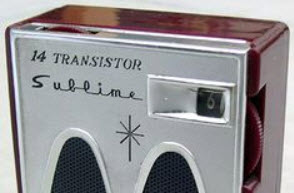 Transistor radios have become commodities. Prodded, no doubt by Marketing Departments, engineers raise the transistor count to ridiculous heights, as if fourteen semiconductors will bring in the ball game better than eight. They don’t. In fact, some of the transistors don’t do a thing. They are just soldered with their leads all in the same hole to increase the semiconductor count. Others are used as diodes, with only two of their three leads connected.

An American company called Hoffman makes some intriguing solar-powered radios, but they cost a fortune, and don’t catch on. Batteries are pretty cheap now anyway. Radio makers begin to stop putting CONALRAD CD markings at 640 and 1040 on our radio dials. It’s the beginning of the end of an era in many ways.

Most Hi-Fi manufacturers have solid state components now, some of them pretty good. Real men still buy tubes though. 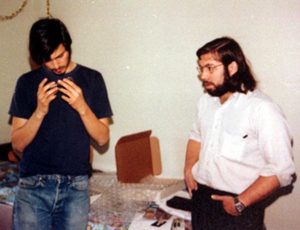 Touch-tone telephones, with push buttons instead of a rotary dials usher in a new generation of telephone services and capabilities. They also get Steve Jobs and the Woz, among others, thinking about “hacking” the phone system using a blue box with—what else? Semiconductors inside.

Phillips develops the audio cassette, and we like it. But it’s not good enough for music yet. 8-tracks and LPs still rule. Besides, the Japanese are convinced that no one will want to be seen walking around wearing earphones.

President John Kennedy is assassinated. Many of us hear about it on portable radios. Not much makes sense for awhile, (some would say "ever since.").

Everybody and his brother make pocket radios by 1964. Everybody except Americans, that is. Most portables are ugly, squared-off, “econoboxes”. Even grand old names like Philco and Zenith arrive here from Japan, and beyond. When they break, (and they do), we toss them out and buy new ones. That’s not to say there aren’t some fine collectibles made in the mid-sixties, just not a lot of them. 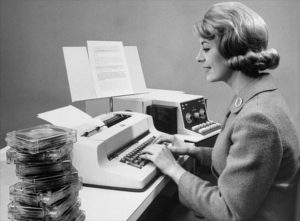 IBM coins the term “word processing,” and transistors are about to help us publish our thoughts.

Leonard Kleinrock writes a book entitled Communication Nets. It’s almost certainly the beginnings of the Internet, but we haven’t a clue.

Sharp Electronics develops and mass-produces an all solid state electronic desktop calculator, called the “Compet.” It’s not battery-operated. This won’t happen ‘till 1967—in America.

I am working part-time in an electronics store now, and taking my paycheck home in boxes marked Sony, Toshiba, Dyna, Empire, and Electro-Voice. At work Harvey makes me demonstrate the stereos by playing Al Hirt, Barbra Streisand, Stan Getz and Astrud Gilberto. They start to grow on me.

Beatlemania strikes. At home I listen to She Loves You, I Want To Hold Your Hand. I Get Around, and Dead Man’s Curve.

I burn a guy’s new VW bug completely to the ground in our driveway when I screw-up installing his aftermarket transistor car radio. From this I learn to disconnect the car battery first.

Pretty soon I’ll need to register for the draft. Guys are going there, and not coming back. Now war seems very much within reach. 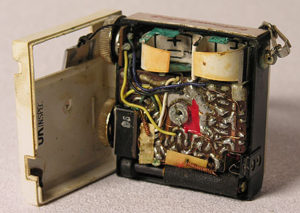 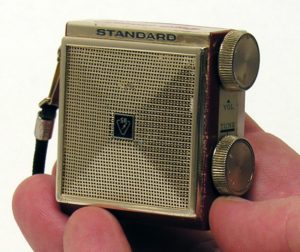 Portable radios are ridiculously small. They’re practically no bigger than their nearly inaudible speakers. But a few play well, especially those from Standard, and Sony. They use hearing aid batteries which leak like crazy and turn green if ignored.

Little, plastic reel-to-real tape recorders appear, many of them not much bigger than a paperback book. They are affordable, but woefully inadequate for music recording. The tape speed changes constantly as if the machines are powered by gerbils. We all buy them anyway.

Ampex develops the “instant replay” videodisc recorder at the request of ABC for Wide World of Sports. Ford announces 8-track players as a factory option. 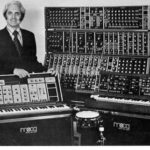 Robert Moog shows elements of his early synthesizers. The Dolby Type A noise reduction system is introduced.The music world is about to be turned upside down.

Gordon Moore, head of research and development for Fairchild Semiconductor, predicts that transistor density on integrated circuits will double every twelve months for the next ten years. This prediction is revised in 1975 to doubling every 18 months, and becomes known as Moore’s Law.

Joe is rumored to be dating Barbie. Our pocket radios still play mostly peaceful, playful hits—Wooly Bully, You Were On My Mind, You’ve Lost That Lovin’ Feelin’. There’s a hint of anger and frustration on the airwaves too, like Barry McGuire’s Eve of Destruction. Dissent is brewing. 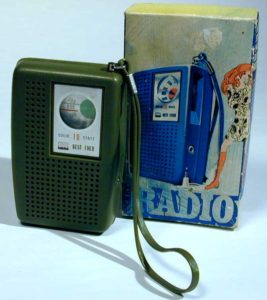 By 1966 most transistor radios became really, really boring, inexpensive “throw-away” boxes of little interest to their original owners, never mind collectors. There are exceptions, of course, such as the miniscule Sony 1R-81 and some of the Standard Micronic micros, but mostly we were being bombarded by radios to yawn at.

Early baby boomers were nearly 20-years-old by now. We were getting more interested in home sound systems, transistorized televisions, HAM, or perhaps Citizen Band radios and the dawning of eight-track tapes and Phillip’s new prerecorded music cassettes. These two new tape formats were already beginning to revolutionize music distribution even though the Walkman wouldn’t hit the scene until 1979.

If you had a thousand dollars you could even purchase an electronic (desktop) calculator and throw away your slide rule.

In any event, for the most part, transistor radios had become boring, low cost commodities by the mid-sixties.

Most consumers still believe that America lost its dominance in transistor radio and other electronics businesses due to the low cost labor in Japan; making it possible for the Japanese to undercut prices to the point where we could not compete. While true to some extent, it’s not the whole truth.

In the mid-fifties, when transistor radios were introduced, American manufacturers sold their products through authorize dealerships—local Radio/TV shops primarily. These dealers were given protected territories, but in return agreed not to sell competing products. So, if you were a Philco dealer, you could not sell RCA sets, and so on. You slept at night knowing that there wasn’t going to be a Philco radio sold in the drugstore down the street. Most drugstores at the time wouldn’t have considered selling radios anyhow. (Hey, they were drugstores, right?) 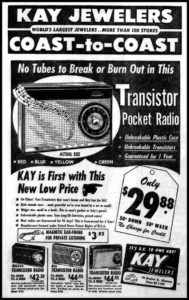 The mid-fifties was also a time of retail revolution, however, and the first real chains of big box stores and department stores were flexing their muscles. Urban sprawl had begun and downtown merchants were watching their customers shop closer to home.

Because American radio manufactures could not undermine the territory protection arrangements they had made with local mom and pop radio/TV stores; and because offshore electronics makers could not sell to mom or pop since their products competed with brands already in local radio/TV shops, the marriage of Japanese radio makers, those bedroom community department stores, and general merchandise retailers was a no-brainer.

And yes, in the beginning Japanese radio prices were slightly lower than American sets, but not by a lot. In the late fifties American radio makers were purchasing many of their components from Japan, but were still assembling radios in the States. Around 1959 somebody, (probably Motorola) started turning to offshore manufacturers for fully assembled radios with American logos on the front and “Made in Japan” or “Made in Hong Kong” subtly printed or stamped on the back or inside of the sets. The landslide had begun.

Speaking of Hong Kong, it t wasn’t until that country’s entry into the radio race that prices really plummeted, at which point both American makers and Japanese manufacturers were forced to turn to Hong Kong for their radios. There are a few very desirable Hong Kong collectibles, but this was the beginning of the end of the collectible radio era, at least for most baby boomers.

What are your favorite memories from this era? Do you have tips and experiences to share? Questions? Suggested corrections or additions?  Leave a comment below. I’ll review comments and post or incorporate the most useful ones. Your email address is required if you choose to comment, but it will not be shared.