What You Don’t Need to Know
(Just Yet)

Are you an experienced electronics hobbyist, or just getting started? You can fix radios without an engineering degree. Flipping through radio repair books from the fifties and sixties can make your eyes glaze over and palms sweat.

These publications often spent entire chapters on the migration of electrons through the various holes in transistor substrates. The good news is that you can ignore all that science, at least until you become interested enough to know more.  Here’s why I believe this:

Many car mechanics know how and when to replace the Oxygen Sensor in your vehicle. They need not know the science behind these sensors however. 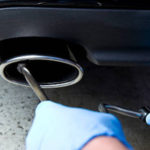 For example, knowing whether or not your car’s sensor is “successively pressurizing and evacuating a sealed chamber between two pieces of ZrO2 using the principle of oxygen ion pumping” is not critical to getting the Check Engine light to extinguish. The tech only needs to do methodical troubleshooting (measure emissions and read the engine’s codes using test equipment), and then make a successful replacement.

It can be so with transistor radio repair as well. While it might be interesting and informative to understand Ohms Law, you can solve many common radio issues without knowing the meaning of I=E/R or any of its variants. Knowing these things, of course might make troubleshooting easier, especially for complex problems, but other times, thinking like an engineer can be a distraction. Like the technician, you can often search for clues, isolate faults and make the radio play again without knowing much math, if any. And then later, if the spirit moves you, there is plenty of radio science to explore at your leisure.

A full course in AM radio theory is beyond the scope of this wenbsite, but the basics are pretty easy to grasp, and might be all you will need to get many sets playing again. In a nutshell, here’s how AM radio works:

Broadcast radio waves from radio stations, (also known as RF signals), bombard the radio’s antenna. In the United States these Amplitude Modulated (AM) signals cover a frequency range of 540 to 1600 kHz.

As you rotate the tuning dial, tuned circuits in the front-end of the radio attempt to reject all but the signals from the desired station.Take a look at this diagram:

The resulting, tiny RF signal is boosted by one or more RF amplifiers, which also help further reject unwanted interference.

Many radio designs include Intermediate Frequency, (aka IF stages) to further boost and clean-up the signal. The Mixer stage converts the incoming radio’s signal to something easier to amplify.

In AM radios this is typically, but not always 455 KHz. FM sets frequently use 262KHz as an IF frequency. (You will learn more about this later.) 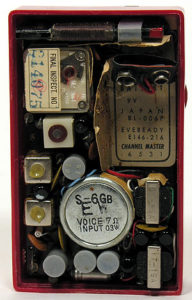 At this point, however, the stronger signals, be they RF or IF, are still above the range of human hearing. A detector stage converts the RF or IF signals to audio signals, which are passed through the volume control, and then amplified further by audio amplifiers before being sent to the speaker or earphone.