While more art than science, it is getting somewhat easier to determine the age of vintage transistor radios and other mid-century electronic devices. This is thanks to the work of a few fellow hobbyists.

For some collectors like Felix here, it is enough to remember that a particular radio was available in a specific grade of school, (and a few of us can still do the math necessary to compute what year that was).

Other collectors want to know the specific year every radio in their collection was actually manufactured. Some enjoy pinning this down to specific months or even weeks of a particular year.

A few want to know the lifespan of a particular model—when was the first one made, and what’s the last manufacturing date? Tracking production changes is a hobby for some collectors, and they work hard to pin down these details.

If you think you might enjoy it, these self-appointed researchers would love you to help them by providing observations about radios in your collection. You will find links to some of these colleagues in the Resources Section of this site.

The bulk of what follows on the topic of dating was developed by a handful of enthusiastic collectors and scholars who should not go unnamed.

Much of the heavy lifting on this subject appears to have been done by such fine folks as:

...and others I suspect I have unintentionally omitted. My apologies. Please enlighten me and I’ll update the list.

The following are some resources worth exploring. 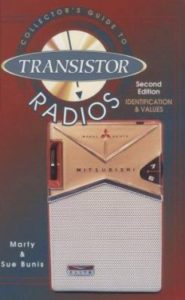 Works of love and unimaginably hard, time-consuming labor, pricing guides are probably the least accurate source of radio dates, particularly for models that had a long lifespan.

But they do get us calibrated, and when you look at radios in the context of the ones surrounding them in these price guides you get an excellent “jumping off point. But purists will want to dig much deeper.

If you are lucky enough to have copies of press releases or announcements sent to dealers you can get a pretty good indication of when products were announced, and their planned shipping dates.

This didn’t necessarily mean that the products went out the door on the promised day, or that the whole world got product the same year, never mind the same day, but company documentation can be quite educational. By the way, once in a while announced products never shipped, so don’t take every press release or magazine article as gospel.

A few—sadly very few radios have inspection date stamps or other dates stamped or written in them. This might be the best evidence of all.

Sometimes owners, or perhaps retailers hand-wrote the date they purchased or sold the radio inside it somewhere, I suppose to document when the warranty would run out. 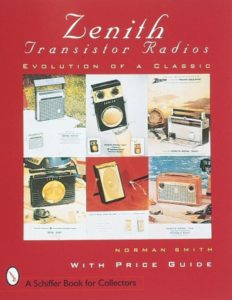 Several of the best model and company-specific collectors’ books go into great detail regarding manufacturing dates. 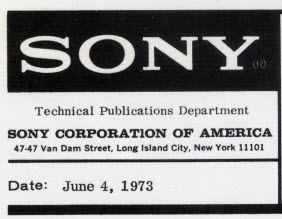 While you might think service documents would be an ideal place to harvest date information that’s not always the case.

Back when they were printed, some, but by no means all contained printed copyright dates.

The copyright only tells us when that particular version of the document was printed however. And Service Bulletins sometimes came out years after a radio began production.

In an extreme example, the Regency TR-1 was first built in late 1954 but the Sams TSM containing its service documentation went into its first printing nearly four years later, in April, 1958.

So, Sam is not necessarily the man where dates are concerned. Certain factory service documents to yield clues, particularly when they discuss mid production changes and list date ranges of those modifications. This is not often the case, however. 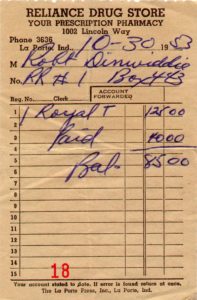 On a lucky day you will get a store invoice along with your artifact, and if the serial number happens to be written on the invoice, and if it matches the radio’s you can be pretty certain of when it was purchased.

You don’t know how long it sat in inventory, however.

This brings us to perhaps the trickiest, but most reliable ways to date most radios and other electronic items—component date codes. You can do this, thanks to the efforts of Mason, Davidson, Kastner and the others aforementioned. 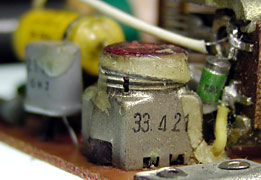 Generally component date codes tell us the year, and month, and perhaps day the component was made. Typically these parts went into radios fairly quickly, so they are pretty good, albeit imperfect indicators of assembly dates.

Electrolytic capacitors, variable tuning capacitors, transistors, variable resistors, and sometimes transformers and other items were date-coded. Different manufacturers used different coding schemes, and some Japanese component makers even used a different calendar than we are familiar with. It’s called the nen-go or era name calendar and it is tied to the particular Emperor of the time. For our purposes this means the calendar measures “Showa years.” (We’ll delve more deeply into this fascinating subject in a moment.)

Let’s start with Japanese date codes since they are so omnipresent, and can give us techniques we can use on capacitors, variable resistors other offshore components. Generally these codes are numbers that reflect either the year and month of manufacture; or the year, month and day. Here are some examples of the formats used:

MMYYDDx A two-digit month followed by a two-digit year and the day, with an extra, ignorable mystery digit. So 0157060 would be the sixth day of January 1957. Remember? We ignore the last digit.
YMMDDx is a single-digit year followed by two-digit months and days. Thus January 6, 1957 would be 701060. Again the last digit can be anything. It’s a throw-away for our purposes.
YMM DDx is also seen. Notice the space. 01/06/1957 would read 701[space] 060, or simply 701 060.
YY. M and YY.MM (notice the dots) are that nen-go dating technique touched upon earlier. Showa was the Emperor when our little radios were made, and he was the boss starting in 1926, so the year 1955, (when Japan first started shipping transistor radios) would be “Showa 30.” 1956 is Showa 31 and so on. Therefore the date 32. 1 (32. [space]1) would be January 1957, Single digit months have a leading space before the dot. So, 32.12 would be December 1957.
Got it? Cool. Usually dates on capacitors and other components in a set will be fairly close to one another, and you can use common sense, and perhaps some help from price guides and other sources to determine if the first digit(s) are months or days. Detective work, for sure, but fun.

How about a new wrinkle? Other date codes employed numbered weeks—a scheme used by many U.S. Makers:

As we boomers retire there seem to be more and more online resources. Here's an interesting list published on the TabiWallah site.