The best way to learn how to recap is to try doing it yourself. For less than the cost of a movie and popcorn for two you can purchase a dead set and the necessary tools and supplies. 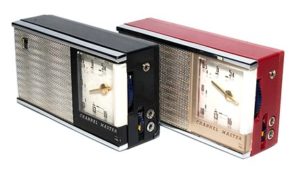 We’ll be using the same radio for signal tracing and alignment examples, so purchasing a dead or dying Channel Master 6056 or RCA Victor P-332 radio will give you a great way to follow along. (The RCA Victor unit was made by Channel Master and identical.)

You can work along if you have a Channel Master 6506 like the one used in this lesson. The same model will be used for the signal tracing and alignment sections of the site. eBay usually has them for under $25.00

You can find complete electrolytic capacitor replacement kits containing specific components and instructions for many popular American and Japanese portable transistor radios, along with other related items for collectors HERE. There is a kit for the Channel Master radio used in this example.

You Can Do This!

You can replace electrolytics, even if you have never done any service work before. The necessary skills can be acquired in less than an hour. You will need to know how to:

If you are don't know how to recognize electrolytic capacitors start here. You are familiar with the concept of component polarity and how to spot positive and negative leads on both old and new electrolytics.

Typical AM-only pocket radios have between two and seven axial and/or radial electrolytic capacitors, with an average about four.

A Printed Circuit Board (PCB) is a thin, non-conducting substrate coated with gold or other conductive metal foil. The foil is etched to create conductors, which act like wires, interconnecting the components.

The component wires from transistors, capacitors and other parts are stuck through holes in the PCB’s foil. Then they are soldered into place. Soldering creates both a mechanical and electrical bond.

You must unsolder the correct parts without damaging the circuit board or surrounding components. This can be frustrating, on smaller sets.

Solder sucking and wicking tools can help you remove the excess solder from joints. They come in all sizes and shapes. I prefer using a solder sucker like the one shown here rather than braided wick shown above it. With a sucker you will be much less likely to damage the radio, and not need three hands.

Try One: Recapping a Channel Master 6506

Lets use a Chanel Master 6056 or RCA Victor P-332 like the ones shown above. These are fairly easy to find on eBay. You can usually buy one for under $25.00. They are well-built, and impressive performers when restored.Let’s use an affordable, readily available Channel Master 6506 similar to the ones shown in Figure 137 for the Recap exercise; and for the Signal Tracing and Alignment projects that will follow.

You will find this model challenging enough to tackle with satisfaction.  Channel Master 6506 radios are also big enough so that you won’t need a microscope or tweezers. They are rugged, and will endure many beginner’s mistakes. Purchase one that is already cosmetically correct, or that will clean up easily using the techniques in this book.

You will be replacing seven (7) electrolytic capacitors. Six of the are radials. One is an axial device.

Because 30μF capacitors are virtually impossible to purchase, you will probably need to replace them with 33μF caps. The 5μF device will likely need to be replaced with a 4.7μF unit. This is perfectly fine.

As you can see above, this radio has numerous wires on the underside of the PCB. You need to work very carefully to avoid melting the insulation on the wires. Gently bend or hold wires away from areas whenever you use soldering or desoldering tools.

You will likely need to temporarily unsolder the brown wire shown in the photo and move it out of the way. The photo above shows the locations, part numbers, and polarities of the pads needing to be desoldered.

NOTE: The pointers in the callouts show the locations of the negative PCB holes. Place the new cap minus leads in these holes.

Don’t forget to reattach the brown wire when you are done recapping.

Reposition any wires you have moved out of the way. Make sure they won’t be crimped by the case when you reinstall the PCB.

Reattach the antenna wire to the antenna jack. Use the insulation spaghetti you saved earlier.

Have you used one of my recap kits? What models would you like to see next? Do you have tips and experiences to share? Questions? Suggested corrections or additions?  Leave a comment below. I’ll review comments and post or incorporate the most useful ones. Your email address is required if you choose to comment, but it will not be shared.