Familiar Music for Your Radio Collection

For many of us the best part of collecting vintage radios is hearing them play. Unfortunately, there aren't that many AM radios stations broadcasting oldies anymore. And the FM oldies stations seem to be creeping up on the nineties era, which is not what most boomer-aged music lovers consider to be a decade of "our" childhood music. This has led to increased interest in low power, home transmitters. 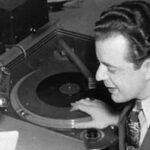 With an in-home transmitter or two you broadcast exactly the tunes that you like, along with vintage public service announcements and delightful recordings of the disk jockeys we listened to as kids. You can connect your transmitter(s) to MP3 players, CD players, Amazon Echo devices, etc.

Some collectors set up at-home radio stations complete with microphones, an audio mixer, turntables and more. In effect, they create their own radio broadcast studios.

The critical ingredient is at least one low-power radio transmitter.  If you only collect AM radios you'll just need an AM transmitter. FM radio collectors will need an FM transmitter. If you care about stereo FM you will want a device capable of generating multiplex signals. There are quite a few different transmitters for sale, and you can build your own from plans, if that interests you.

Originally designed for use by realtors who hoped that buyers would drive up to homes for sale and listen to radio broadcasts describing the property's features, these have found their way into radio collectors' homes. Very few realtors use them anymore.

Besides being repurposed as hobby transmitters, they are being used in church parking lots, at car show gatherings and by other groups affected by the pandemic, in full swing as this is written.

You can purchase Talking House transmitters either new, used or refurbished on the internet. I have seen them advertised for as little as $69.00 to over $400, plus shipping.

I sell Talking House TH5.0 packages on eBay that includes  full color, illustrated instructions written specifically for radio collectors. It details setup, operating and troubleshooting your installation. There are other useful items as well, designed to get you up and running quickly.  Look for them HERE.

If you purchase a used transmitter, the TH 5.0 units are usually better than earlier versions. Model numbers are printed on the bottom and should look like the one shown here. If a listing does not include a picture of the label, ask the seller for the model number before purchasing.  I also recommend that you purchase from someone who will let you return the transmitter if necessary. 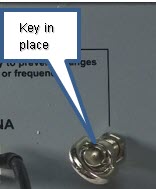 The power supply and the key are both important accessories. Be certain that they are included. The power supply has a third ground pin which is used as part of the antenna configuration. There are ways around this, or you can purchase a replacement power supply from the manufacturer for around $40.00 last time I checked.

The key is required whenever you need to change the transmitter frequency. It is also required when you record to the transmitter's built in five-minute audio memory chip. In a pinch you can fashion one yourself by shorting the center and ground pins on a 3.5mm mono earphone plug, but having the real thing is better.

The manufacturer claims about a 300-foot range, depending upon conditions. Things that can affect range include transmitter antenna location, nearby radio interference from computers, household appliances, etc. Obviously, receiver sensitivity and condition play a part as well.

You will read all kinds of strong opinions online about Talking House Transmitters. Hobbyists seem to either love or hate them. I have used and sold over 200 of these, and I believe that, when installed and operated properly, they are a very good choice for radio collectors.

There are several sites that offer advice on circuit modifications to improve the sound quality, but frankly, if you collect portable radios, the sets' speakers will be the limiting factor in sound quality. And heck. The high end of most commercial AM broadcast audio rolls off at around 3 kHz.

In the United States, radio emissions of virtually any kind are regulated by the FCC. The agency has very strict, and at times confusing regulations regarding unlicensed, in-home transmitters.

At the risk of oversimplifying, transmitters must have an output power of 100mw or less and have a signal strength of no more than 250 uV/m at 3 meters. The combined antenna and ground wire length (difficult to accurately measure, and often subject to debate) is limited, as is the transmitter's frequency range.  There are other technical requirements too, including limits on spurious radiation, harmonics, modulation level and more. This is all spelled out in a document called Part 15 of Title 47 of the Code of Federal Regulations.

Those regulations cover much more than AM radio transmitters. Wifi devices, bluetooth gadgets, car key fobs, and lord knows what all need to comply. And there are differences in the rules depending on a devices frequency, intended use, amount of time it transmits and much more. Only a building filled with bureaucrats can imagine the permutations.

Here is a PDF document that gives a petty good overview of Part 15. It was published by the FCC and is titled UNDERSTANDING THE FCC REGULATIONS FOR LOW-POWER, NON-LICENSED TRANSMITTERS.

If your goal is to listen to tunes on your collection, place a properly installed FCC Certified transmitter in or near the room with those vintage transistor radios, and you will be fine.

Do be aware that FCC compliant is not the same thing as FCC certified.  In addition to meeting the FCC requirement your transmitter must have been tested by a licensed laboratory and given FCC certification. There seems to be a loophole for home-built transmitters, but like everything else about hobby transmitters, there are debates.

One intent of the FCC's regulations is to keep neighbors from interfering with each others' reception. But there can be more serious consequences, particularly with hobby FM transmitters. There have been numerous reports of interference with aircraft navigation and other critical radio signals. Pilots can, and do report these problems and they are investigated.

Moreover, there are groups of professional radio engineers who make a living setting up legal transmitter systems. They have become concerned with the explosion of drive-in churches and other events where transmitters are being used. These engineers are actively looking for illegal transmissions. They can, and might report you to the FCC if you don't take their advice. Here's an interesting article on the subject.

Plenty of hobbyists ignore the FCC regulations. They use illegal antennas and grounding arrangements to improve reception. They operate in excess of 100mw output, and so on. There are also "pirate radio stations" that knowingly use very powerful transmitters, make up their own call letters (also illegal), and brag about how far their signals reach.

Unless you are a pirate, or interfering with critical communications, or have a grumpy neighbor it is quite unlikely that officials in an FCC truck will pull up in front of your house to monitor you signal and write a citation. But it does happen. You do not want to have happen to you. Fines can, and have been considerable. Legal fees will add up quickly as well, should you choose to litigate.