A signal tracer is simply an amplifier that can detect audio and RF signals and then play them through its built-in speaker. By tracing signals stage-by-stage through your radio you can find the issues that cause it to not play or play poorly. When you know which parts of the radio are working properly you can concentrate on suspect stages and components.

For example, if you can hear a local radio station through a signal tracer connected to the center tap on the volume control, but there is no sound from the radio's speaker you know that the antenna, tuning circuits, IF section and detector are all working. You can then concentrate on the audio circuitry, speaker and earphone jack.

As you will see, in a working radio, you should be able to trace "forward" through the set with the signal tracer and hear the radio station at the inputs and outputs of the IF amplifiers all the way up to the audio amplifier's input.

As you know by now if you have read about radio theory, a receiver processes both radio frequencies (RF) and audio frequencies (AF). You want a reliable device or devices that can both provide RF and IF outputs and also detect those signals and let you hear them. This way you can check each "stage" of the receiver under test regardless of what's broken. 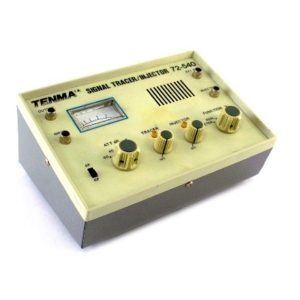 A  signal tracer  lets you listen to both RF and IF signals as they pass through the radio under test. You can either buy one or build one. Signal tracers are simply audio amplifiers and speakers with test leads that let you locate and hear signals in the various radio stages. They also have a diode used to detect and convert RF signals from the "front end" and IF sections of the set into audio that you can hear through the tracer's speaker.

If you plan to do a lot of bench work you will want to use a signal generator, or at least a signal injector to provide known-good test signals.

I am currently using an FY6900 DDS Function Generator for signal tracing and alignments, but that's overkill for quick signal tracing.

Some tracers combine signal generator and tracing capabilities in one box. The vintage Tenma 72-540 above is an example of this capability. It provides both audio and RF inputs and outputs.

While not absolutely necessary a schematic, or better yet factory or Sams service documentation will make tracing much easier. For example, Photofacts show corresponding, numbered test points on both their schematics and circuit board photos.

So in the case of this Channel Master 6506 the center point of the volume control is labeled as Test Point 23 on both the schematic and circuit board photo. 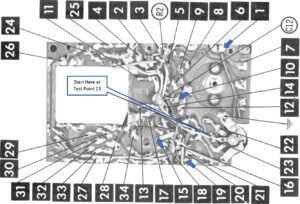 For this example, let's assume that you are starting with a completely dead Channel Master 6506 radio. If you are working on any mid-century transistor radio, there is a very good chance that one of these Quick Fixes can get it playing again. Try them before signal tracing or, heaven forbid, before attempting to align a radio.

If You Can't Hear a Local Station

When you can't hear a station by poking anywhere in the set while tracing you should suspect the antenna wiring, tuning circuitry, and perhaps the oscillator/mixer circuit.

If you have access to a signal generator, or injector and you inject a modulated IF signal (typically 455KHz, but sometimes 256KHz into the first IF section, and hear that tone in the radio's speaker, the fault is almost certainly in the tuning or Oscillator/Mixer sections.