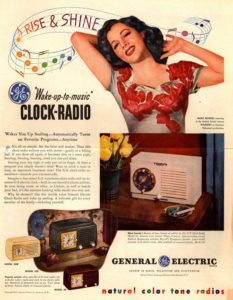 Most radios sold in 1950 were A/C powered tabletop sets, although there were exceptions like the lunchbox-size battery portables made by RCA, Emerson and others. Mostly mom and dad were buying plug-in clock radios and kitchen radios, and new cars with dashboard radios, all of them containing tubes. A/C-powered five-tube superheterodyne radios were the most common household radios. If you plugged one of these in the wrong way and then touched its metal chassis and ground you became part of a potentially lethal circuit. Polarized plugs and wall outlets evolved to minimize this risk. 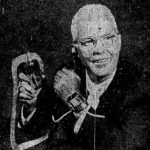 Our house had four radios. One in mom and dad's bedroom. One in mine. Another in the kitchen, and the forth was the focal point of dad's workbench.

In 1952 Western Electric engineers made a four-transistor wrist radio as a gift for Dick Tracy creator Chester Gould.

A few more commercial portables surface in 1951, 1952 and 1953 but the real commercial evolution of portable sets won’t begin until 1954. 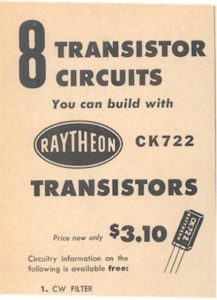 Many of us are already building transistor radios in our basements or on kitchen tables by 1953. The word is out. Transistors have been used in hearing aids for a while now, and Raytheon, the principle maker of the little devices is having a devil of a time with quality control.

The vast majority of the transistors they manufacture work, but they are not good enough for hearing aids. They are too noisy, or don’t amplify enough. It seems a waste to toss these out. There might be a hobby market, the firm reasons, so they scoop up the hearing aid rejects, encapsulate them in bigger outer shells, label them CK722 and pass some samples out to electronics magazine editors, engineers and experimenters. It works. We become addicted. 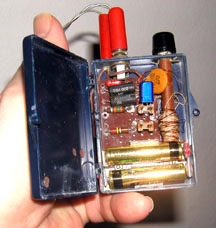 Chuck Colby claims he started producing the world’s first transistorized radios, the Colby TR-2 in early 1954. Chuck was 12-years of age at the time, living in Torrance, California and he charged $12.99 for his two-transistor earphone radios. Chuck sold to his friends, family and paper-route customers and made enough money to convince him that electronics was his field of interest. It started him on a life of inventing many “firsts” over subsequent years. Learn more here at the DigiBarn Computer Museum.

The folks at Texas Instruments, with the help of Indianapolis, Indiana manufacturer I.D.E.A launch the world’s first commercial transistorized product in October 1954. It’s the Regency TR-1 pocket radio, uses four transistors, and costs an astronomical $49.95, (that’s if dad can find one). The battery’s not included. The average after-tax American household income is less than $1,700 per-year, $33.00 per-week. Here’s a wonderful old Promo video from Regency:

The American Motors Company, (AMC) is founded. They began designing the Rambler. The World Series television broadcast is in color for the first time. NY Giants defeat Cleveland (4-0).

America and Canada begin work on the 3,000-mile long Distant Early Warning system, dubbed “the DEW” Line. Workers are said to have stood in front of active radar antennas, using the microwave energy to warm up their bodies, apparently unaware of the risks. This doesn't end well for many.

Nautilus, the world’s first nuclear submarine, is launched. The French are having a little trouble in Southeast Asia. One of their favorite colonies gets divided into North and South Vietnam.

Those of us who are lucky enough to have a television in the living room can watch Captain Kangaroo and Howdy Doody on Saturday mornings, but only if we clean our rooms first. 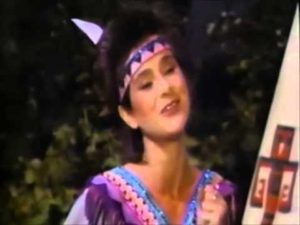 Hey kids, what time is it? I have my first crush. It’s on… Princess Summerfall Winterspring.

One winter night, hidden under my bedcovers in Buffalo, I think I hear Chicago, hundreds of miles away on my Remco Crystal set. At age seven life is already getting interesting.

The ‘55 Thunderbird hits showrooms. I want one. Illinois passes the first mandatory seatbelt law. We are importing a lot of our cars now. But we still make our own transistor radios.

Bill Haley & the Comets are Rockin’ Around the Clock. Maybelline is being untrue to Chuck Berry, and the Platters want Only You.

The U. S. sends more than two-hundred-million dollars in aid to Vietnam. Rosa Parks refuses to give up her seat on the bus, and the nation gears up for Operation Alert—a drill where we pretend that sixty cities have been targeted for nuclear destruction. It’s time to duck and cover. 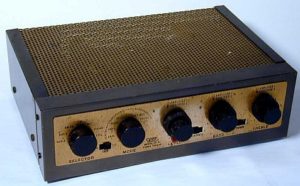 All the lucky kids get coonskin caps for Christmas. Mom gets to take her first oral contraceptive—that is unless the Pope or dad tell her not to. Many a guy is listening to his Hi-Fi, if he can afford one, since stereo has been around only four years now, is still too expensive, and there are no stereo records to play, just reel-to-reel tapes. It’s all tube gear since transistors can’t drive big speakers yet. Nameplates say Garrrard, Granco, Harman-Kardon, and Lafayette Radio. If he is handy, maybe dad built an Eico kit amp, and the speaker enclosure with his table saw and some grill cloth.

Disneyland opens, and the Mickey Mouse Club glues us to our televisions. What was it that Ozzie does for a living? And does your mom cook dinner in nylons and heels like Harriett? We line up for our Polio shots in the gym. I start reading Popular Electronics Magazine. Lou Garner mostly, Carl and Jerry too. I long for my first CK-722 transistor. 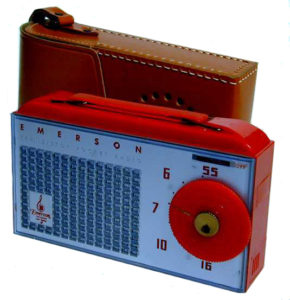 Some portables still have tubes, others like the Emerson 838 have tubes and transistors, but transistors are taking over.

The first videotape recorder is introduced, and it changes the way television programming is produced and aired. Some imagine a day when we will own home VCRs.

The heart pacemaker is invented.

The Pam Model 710 is England’s first portable transistor radio. Priced at roughly a month’s wage, it’s “a luxury item, to be enjoyed by the wealthy few.”

The Platters are Great Pretenders, Elvis pleads Love Me Tender, and Dean Martin sings Memories are Made of This.

There is a crisis of some kind in some place called Suez. Eisenhower is reelected President. Mom and dad like Ike.

The $64,000 Question game show airs. Everybody seems so smart on that program… How does that one guy know all those answers?

Dad buys us a new car. I want a cool red-and-black Ford Sunliner convertible with whitewalls. We get the four-door, in gray with blackwalls. 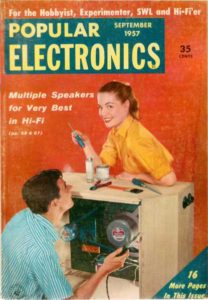 Stereo radio is broadcast with one AM channel and one FM. It stinks. ‘Still no Hi-Fi transistor offerings yet.

Barry Gordy starts Motown records. Pat Boone is writing Love Letters in the Sand. Fats Domino is up on Blueberry Hill, and the Everly Brothers are trying to Wake Up Little Suzie. Sputnik circles the earth, beeping. American Bandstand goes national. Frozen pizza hits the freezer aisle. We have over 47-million televisions in our homes. Some families even have two! We fling Frisbees.

Sony’s TR-63, their first really “pocketable” transistor set, arrives here early this year. It invented the brand name Sony at the same time. Check this out:

I finally get my first CK-722 transistor and use it as part of my “Big Ear” for the science fair. It’s an amplified listening device with a crystal microphone and a kitchen colander as the parabolic dish. Second place.

Ford introduces the Edsel. The gray, four-door family Ford is looking better and better to me now. So is Annette Funicello… What does it all mean? 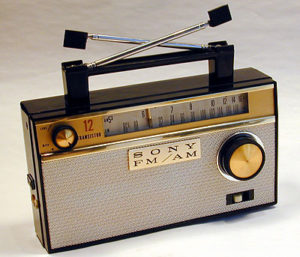 The Japanese are giving American radio makers a real headache now. The imported stuff is affordable, reliable, and fun to hold. Sony is shipping us cool sets like the TR-710, and the world’s first all-transistor FM portable, the TFM-151.

Stereo LPs are becoming commonplace, making dad’s Hi-Fi, (if he has one yet), sound pretty shabby. Velcro is invented by the Swiss. AM/FM stereo dies quietly, and stereo FM broadcasts are widespread, but most of us lack the necessary “multiplex” receivers, or even adapters. Engineers and marketers scurry successfully.

We are in a recession. The first domestic commercial jet service is launched by National Airlines. The American credit card is born. Diners Club, then American Express, then Visa.

Pvt. Elvis Presley is inducted into the Army. Connie Francis sings Where the Boys Are, all the Everly Brothers have to do is dream, and we can’t get the Coasters hit Yakety Yak out of our collective brains. Or is it Sheb Wooley singing Flying Purple People Eater, or the Chipmunks who drive you crazy? ALVIN!

Cool kids are getting tired of doing the Bop.

The Nautilus submarine is under the ice at the North Pole. We wonder why. NAACP’s Youth Council begins sit-ins at Oklahoma City lunch counters. This we begin to understand.

I set up my own radio station and transmit music to the neighbors. Dad buys a console stereo. Mom plays The Sound of Musicsoundtrack, and Lawrence Welk endlessly. (Ughh!)

At eleven years of age I realize that I really want--make--that need to buy my own brand name transistor radio! 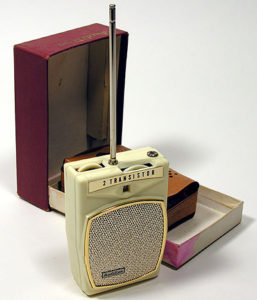 Hitachi, Sony and the other wolves are at the door now, cranking out an amazing variety of radios with aerospace fit and finish. There’s a lot of inexpensive stuff arriving too, imported as ”Boys Radios.” Since toy makers don’t have to pay duties levied against offshore radio makers, driving Zenith, Admiral, Motorola, Philco and the other US makers further up the wall. Should they stay the course, they wonder, making beautiful but expensive battleships like the Motorola 7X24W, or start to cut corners, and design radios for efficient production rather than sex appeal? Or, heaven forbid, buy them offshore?

Philco announces a transistorized television. There are still some tubes inside, but it’s a start. ‘Lots of ads for stereo gear now. Popular Electronics runs a transistorized amplifier construction article. It’s powerful enough to drive a typical Hi-Fi speaker… quietly. Texas Instruments announces the invention of the integrated circuit.

Barbie has her coming out. Chimps take a ride into space and back; then seven astronauts are chosen to do the same.

It’s the beginning of the Civil Rights Movement. Bonanza takes to the air. Fidel takes over Cuba. Elvis is back.

The Coasters sing Charlie Brown, and the Fleetwoods invite us to Come Softly.

The cover of Electronics Illustrated commands me to “Build This Transistor Radio.” I do. No more Sound of Music. Now I can stay in my room and listen to what I like.

Not yet a teen, I join the “me” generation.

Did you make electronic items as a kid? Do you have any pictures? Do you have tips and experiences to share? Questions? Suggested corrections or additions?  Leave a comment below. I’ll review comments and post or incorporate the most useful ones. Your email address is required if you choose to comment, but it will not be shared.