We baby boomers were not the first to have battery powered radios and crystal sets. Our parents and their parents owned them too. Radios were already battery powered in the early 1900s and portable sets were all the rage by 1939. The first commercial shirt pocket radio used vacuum tubes, not transistors.

As kids, we were not the first to build home-brew receivers into our bicycles. Nope. That happened long before our time as well. We were, however, the transistor generation, and those little radios changed us as much as tube radios and crystal sets molded our parents and grandparents.

It’s no wonder that we enjoy looking at them, holding them and listening to transistor radios. They bring back such a flood of sense memories—lazy summer days at the beach, learning the joys of slow dancing on the back patio, listening to ballgames on an earphone while reading Boy’s Life by flashlight under the covers; plucking Radio Moscow out of the starry sky from our tents at scout camp.

Many of us learned about the death of a president and the exploits of astronauts on our transistor radios. Pocket radios kept more than a few boomers company in study hall, on our paper routes, and yes, eventually in Vietnam.

Long before I could afford to buy a commercially-built transistor radio I made one of my own. It performed considerably better than my Remco crystal set, even without a ground wire or outdoor antenna. And there was, of course the pride that came with figuring out how to build it all by myself. 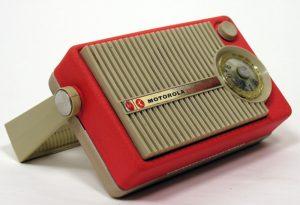 This didn’t stop me from lusting after something more substantial, of course. Mr. Reid, my friend’s dad from down the street had an early Motorola similar to this one. He was the envy of the whole block.

The Lafayette Radio catalog and Popular Electronics magazines kept offering up newer, flashier, and cheaper sets every boy (and quite a few girls) wanted. Eventually my eagerly-squirreled-away paper route profits made it possible to buy a radio even Mr. Reid would have been proud to own.

If you are reading this, chances are you have comparable recollections, and a similar attachment to these little radios of our childhoods. We were, indeed, the transistor generation.