What good is a radio without a speaker. How else could you mom have said “turn that darn thing down!” You usually find speakers at the right end of schematic.

They come in many shapes, sizes and mounting configurations. Their impedance (measured in ohms) is important and must match the audio circuit’s requirements.

Contemporary replacements for vintage speakers are hard to find. Save salvaged ones, especially from rare sets with oddball speakers like the Zenith Royal 500H shown here along with its schematic symbol. 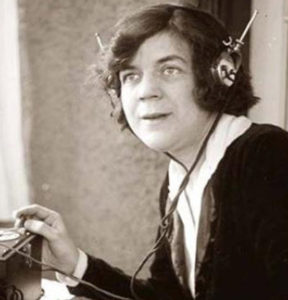 Early radios used large headphones that clamped onto one's head like a vice.

They contained coils of wire, permanent magnets and flat metal disks that vibrated when audio signals were pumped through the coils.

As early hearing aids evolved earphones replaced headsets. They were more comfortable, less cumbersome and not so obvious.

Most of the early ones used crystal technology, and presented very high impedance to the radio's audio circuitry.  This was both helpful and necessary in radios with simple circuitry.

When replacing earpieces you should try to match the original impedance whenever possible.

Have you ever heard anyone complain that their vintage radio's earphone jack is "broken" because when they plug in there contemporary headsets they only hear sound in one ear? It's not a broken jack, it's the wrong jack for stereo headsets.

Because of the difference in mono and stereo plug and jack designs today's stereo headsets won't connect the right earpiece properly when inserted into a mono jack.

There were several different connector sizes used back in the day. The 2.5mm ones we are familiar with today were also most common then. But smaller ones, and even multi-prong connectors were employed as well.